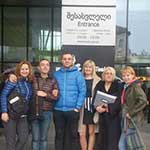 ICW Celebrates the Registration of the Eurasian Women’s Network on AIDS, officially in Georgia

ICW is thrilled to share this news from our sisters in Eastern Europe and Central Asia. We are even more excited about our future collaborations with all
the amazing women in the region as we welcome you to the ICW family. We will keep you updated on our partnership moving forward as we continue to support
this effort. Go ladies go!

In the past ten years, the necessity for interaction between the topics of gender violence, sexual and reproductive health and rights and the vulnerability
of women to HIV has been recognized by activists from the community as well as global political leaders. The aims to put an end to the AIDS epidemic
and eliminate violence against women go hand in hand and both require their place in the period following 2015 in the programme for sustainable development.
In the resolution that was passed by the UN General Assembly (65/277) in June 2011, it was stated that the government-members continue to be deeply
concerned that:

“The Eurasian Women’s Network on AIDS was created so that the political declaration on the fight against HIV/AIDS and the human rights became a reality
for women in the region of Eastern Europe and Central Asia,” said Svetlana Moroz, a representative of EWNA.

“These rights are related to the access to public health services, which includes reproductive health, the elimination of violence against women, and the
right to be included in the political and societal discussions on which our lives and health depend.” She added.

The Eurasian Women’s Network on AIDS began its story in the summer of 2013 when a group was formed by women activists from Russia, Kazakhstan, Ukraine,
Georgia, and Tajikistan, who initiated the creation of a regional association of women affected by HIV. Half a year later they were supported by representatives
from Moldova, Armenia, Uzbekistan, Kyrgyzstan, Estonia, and Belarus. In December 2013, in Tbilisi the constitutional convention of EWNA was held, in
which women leaders from 11 countries from the EECA region participated. In November 2014 a strategic planning meeting took place for the years 2015-2020.
Following this they reached out to ICW to request being the regional affiliate.

“We have been part of the ICW family for a long time and now we are making it official!” said Olena Stryzhak, ICW International Steering Committee Member
for Europe and Central Asia. “Together we are stronger and can push forward our strategic priorities with our global sisters.”

Get the latest news in your inbox!

Your gift will help ICW continue its important work supporting and empowering women and girls living with HIV around the world.